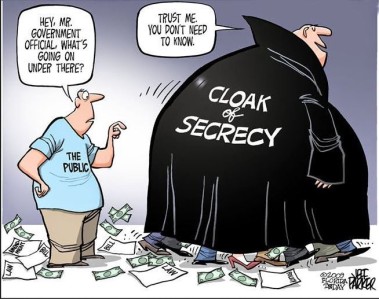 Bruce Montague once said, “Trust is a two-way street. If your government does not trust you, how can you trust your government?” What may have started as a veil of transparency has, instead, become a cloak of secrecy. Somewhere along the way, the political street sign was modified to now read, “One way.”

High hopes for pellucidity were attached to the inaugural Freedom of Information Act (FOIA) – passed by Congress, and signed into existence in 1966, by President Lyndon B. Johnson. Still today, FOIA.gov describes FOIA as “the law that keeps citizens in the know about government”; but is such a valid descriptor? Is the American citizenry “in the know,” or are we, instead, fumbling through a dark-room, while struggling to find the light switch?

Exceptions to the law are becoming more the norm than, well, the exception.

Residents in Flint Michigan have found this to be true as they sought answers as to who was responsible for the increased lead toxicity in their public drinking water. Numerous groups filed FOIA applications with the state and local government, in an attempt to obtain disclosure of agency and legislative communications.

“Typically in response to a FOIA request, the public body will redact information that falls under one of the exemptions,” said Robin Hermann, an attorney for the Michigan Press Association. “The (Michigan) legislature (and employees thereof) is specifically exempt.”

Requests for emailed correspondence from Michigan Gov. Rick Snyder were so heavily redacted that their release seemed almost a farcical revelation to the public.

Virginia residents are equally wary as they learned that Del. Roxann Robinson, R-Chesterfield, introduced a bill to the 2015 legislative session that allowed for more secrecy than revelation. House Bill 1389 prevents FOIA disclosure of the chemicals being introduced into the ground during fracking operations. Fracking is the process of injecting water and chemicals into underground shale rock to extract oil and natural gas.

According to the Daily Press, chemical information will only be released to the Virginia State Department of Mines, Minerals and Energy – to use in the event of an emergency. The active chemical list will not be publicly disclosed – purportedly to protect the “proprietary chemical and water blends…from competitors.” Small comfort to those who are concerned about what chemicals may be seeping into their local water table.

On a national level, a January 2016 report issued by the Office of the Inspector General of the State Department (IG), explained why presidential candidate Hillary Clinton’s private email server was excluded from FOIA requests – in spite of the national security relevance of her mailings.

“FOIA neither authorizes nor requires agencies to search for Federal records in personal email accounts maintained on private servers or through commercial providers (for example, Gmail, Yahoo, and Hotmail),” the report states.

Additionally, many of the FOIA requests – most of which were submitted in 2013 – received “inaccurate and incomplete” responses. Adding insult to injury, of the 240 requests filed against then Secretary of State Clinton, 177 remain unanswered, as of the report’s release in January 2016.

According to the U.S. Securities and Exchange Commission, the following nine exemptions exist to FOIA requests:

8.  Contained in or related to examination, operating, or condition reports about financial institutions that the SEC regulates or supervises; or
9.  Those documents containing exempt information about gas or oil wells.

Wrapped in the cloaked secrecy of these nine exemptions exist countless other exclusions -created and protected by state and local agencies, who, too, believe their information should not be released for public disclosure.

Given that sentiment, perhaps the questions we should now ask are, 1) what is our government trying to hide; and 2) and why are we afraid to ask for our rightful revelations?

Lest we forget, if we are to remain a free and open nation, trust must remain a two-way street.